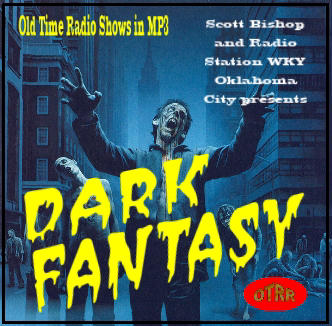 Dark Fantasy was a short series with tales of the weird, adventures of the supernatural, created for you by Scott Bishop. The series aired as a horror drama on NBC between 1941 and 1942.

Dark Fantasy was a series dedicated to dealings with the unknown. Originating from radio station WKY, Oklahoma City, it was written by Scott Bishop (of The Mysterious Traveler and The Sealed Book fame) and was heard Fridays over stations. Tom Paxton served as announcer. The shows covered horror, science fiction and murder mysteries.

Although a short series, the shows are excellent with some stories way ahead of their time. The following is a news promo promoting the show:

Every since Lights Out went out several years ago, fans of the fiendish have been clamoring for more good old goose-pimple horror drama on the air. Now they have it. One of the programs that currently freezes the airwaves with its chilling stories is Dark Fantasy comparatively new to the networks. In the late hours of Friday nights these shivery, shocking stories go out over NBC - right straight from Oklahoma City, which you might not have thought of as headquarters for haunts. Station WKY is the home of the Dark Fantasy plays, and the writer is Scott Bishop, who lives in the midst of mystery and the supernatural, represented by the innurnerable volumes of thriller fiction, fantasy lore and all kinds of horror literature that fill his home andhis office. Bishop has long contributed to network broadcasting and to magazines. He says, "Give the listener enough material to let his imagination go to work, and he'll supply his own goose-pimples." Dark Fantasy has been furnishing plenty of such material since last November. And judging from enthusiastic comment, the horror fans are responding with goose-pimples galore! Tune in every Friday on Station WKY Oklahoma City.

And a good many of the more familiar ones started right here...and also on the two other shows that utilized Scott Bishop's talent for creeping folks out: THE MYSTERIOUS TRAVELLER and THE SEALED BOOK.


We have an idiot here that keeps knocking Dark Fantasy and Scott Bishop. What's his problem I'd like to know? If you don't like the show don't listen.

You got the shows for free so I don't see where you even get the right to dis the show as much as you do.

Not only that...but you haven't even researched the show enough to find out that "Scott Bishop" is a pen name. The writer's real name is George M. Hamaker

http://www.mwotrc.com/rr2011_02/darkfantasy.htm
This series is a class act and one of the best preserved around.
Reviewer: PhilipJ - favoritefavoritefavoritefavorite - June 15, 2013
Subject: "Dark..... fantasy..."
I'm a bit of a newcomer to OTR, so I'll get that caveat out of the way. I enjoyed this series, despite the fact I would agree with some previous reviewers that the pace is slower than other programs I've listened to. Personally, I don't like the break-neck pace of some programs - I find it difficult to follow, particularly when wrestling with low quality recordings. I appreciate a slow pace - it allows me feel more submerged in the world I'm being presented. Some truly odd stories, I recommend giving it a listen.
Reviewer: dreibel50 - favoritefavorite - February 27, 2012
Subject: Turkey Sandwich . With Extra Cheese.
First off, after some research on the subject, I don't see any empirical evidence that Scott Bishop was in any way connected with The Mysterious Traveler or The Sealed Book. And even if he was, it would appear that the show's producer Joe MacGregor and the show's writers Robert Arthur and David Kogan woukd have made sure his scripts would be re-written to a quality up to their standard.

In fact, many of Bishop's scripts for this series are quite bad, full of cliche, poorly plotted, with huge continuity holes. Many sound like they were written 20 minutes before air time. The fact that his ensemble cast is more wooden than Pinnochio certainly doesn't help things.

To be fair, he did have a few good scripts in him - "Pennsylvania Turnpike", "The Demon Tree" and "The Edge Of The Shadow" are good little chillers. And a few episodes like "Man With The Scarlet Satchel" show promise if only some care was taken to fix some bad plot points. Too many of these, though, suffer through being plodding, too talky and badly acted.

And, please, there are a number of writers who blazed trails and set the bar for writing better than Mr. Bishop. As well as Arthur and Kogan, Wyllis Cooper and Arch Oboler have done way more frightening and original stories - and did them before Dark Fantasy. Even the last few years of Suspense - which at times was like listening to old men die - showed better scriptwriting and acting than this series. Suspense, Lights Out, Quiet Please,Murder At Midnight, Mysterious Traveler - all way better series.
Reviewer: Poe1809 - favoritefavoritefavoritefavoritefavorite - February 28, 2011
Subject: .
These shows move along at a comfortable pace that adds atmosphere to the story. If you're someone who insists upon going 300mph all the time, this is probably not the place to stop. For people that are able to sit down and listen to some creepy stories without bouncing around like a 2 year old on a caffeine binge, you'll enjoy this show. I know I did, so give them a listen
Reviewer: RealHumDinger - favorite - February 28, 2011
Subject: WOW! P-U!
I love OTR Horror..... The Weird Circle, Lights Out, Quiet Please, Molle Mystery Theater, the works! But this is just God (Lord forgive me) Awful. The pacing is so slow that it makes my grandma rocking in her rocking chair seems to be as quick as light!!!!!!! Good riddances to poopy rubbish.
Reviewer: deckard9080 - favoritefavoritefavoritefavorite - January 8, 2011
Subject: Creepy and fun
I really like the ghost stories. They have actually really scared me at times. The hair on the back of my neck stands on end.

I want to thank you guys for saving and sharing these shows.
Reviewer: Roady43 - favorite - December 16, 2010
Subject: Icky Icky Eww!
This is just down right not good! I listened to three episodes throughout the series "W is for Werewolfs" "Superstition Be Hanged" and "Rendezvous With Satan" and just could not find my self enjoying any of those.
Reviewer: cappy4 - favoritefavoritefavoritefavoritefavorite - December 11, 2010
Subject: Redress
wolfie16 -while that is your opinion-shall we just say it's completely without sense or validity. pixoldyne -glad this saves you the expense of ambien. For the rest of us not under the influence of attention deficits this well produced and well done series is very worthy-equal in its virtues and deficits to Quiet, Please and some of the best of Suspense and Light's Out. It IS leisurely-like a good book on tape-why not. A listening pleasure-and a series with, often times, stories that do NOT end happily-they end horribly! Well worth enjoying!
Reviewer: pixoldyne - favorite - August 23, 2010
Subject: "B" is for Boredom (and "S" is for Scathing)
Let me preface this by saying that i am a huge fan of OTR, and consider myself pretty forgiving. That being said...

Dark Fantasy is akin to an Edgar Allen Poe novel read through a 600mg Lithium haze. The scripts are plodding, banal and lethargic. The characters are one dimensional and, quite frankly, just plain moronic. Most react to their "unearthly" and "frightening" predicaments with zero reflexes and cognitive skills.

One redeeming quality about "Dark Fantasy", is its uncanny ability to cure insomnia (provided you can refrain from becoming enraged at the snail-like pacing and ham-handed dialog).
Reviewer: wolfie16 - favorite - July 27, 2009
Subject: 5th rate OTR
While this series is well preserved, that's about all you can say about it. There's no suspense, no mystery, nothing but annoyance and boredom. In every show the pedestrian plot is completely given away within the first 5-10 minutes. The writing is unimaginative and full of cliches. The acting is sub-par. This series is just not worth the time it takes to listen to a single episode.

Uploaded by OTRRArchive on December 19, 2006